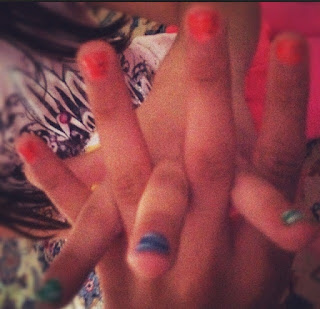 My sister-in-law asked me to baby-sit on Friday because she and my brother both had to work. My schedule is more flexible than theirs and I love spending time with my nieces, so I said yes. I asked my nieces if they wanted to go to The Jump Around – an indoor inflatable playground with games and slides, cushions and seats on which they can jump up and down. They said no. They wanted to go to Color-me-mine and later to go get their nails done and in that order because they didn’t want to get their nails ruined by getting watercolor paint on them.
When we got to Color-me mine, it was empty. A young and friendly dark-haired girl, the only employee there, finished ringing up her one customer as my older niece picked out a jewelry box in the shape of a pie, my younger niece a rectangular bank with letters and peace sign and I chose a traveling coffee mug. Next, we each picked out five colors. The teenager working there gave us paper towels, brushes and hints on how to create various designs. We decided to go with the free form, making sure it looked handmade, forgetting about perfection and letting the paints run into each other.
We were having so much fun and then two toddlers came in with their mom, picked out their ceramics and colors and sat down at a nearby table. We got paint all over our hands and helped each other with the colors as we went back and forth, deciding how to make our “creation” more artsy. By the time we were finished, we were hungry for lunch. The girls wanted to go to Subway. The cashier at color-me-mine took down my number so that she could call me the following week and let me know when to pick up our art creation. She had to glaze and cook them.
At Subway we chatted about my brother, another cousin of mine who is getting married in May and my mom. My mom loved dolls and she had just started collecting when she got ill. So, I told my nieces that I wanted them to have the dolls as long as they took good care of them. My brother doesn’t want them to have the dolls because he says they will mess it all up. But something tells me that my mom would want them to enjoy the dolls now instead of years later.
After lunch, off we were to the nail shop. I had already had my nails done earlier that week. My nieces picked out their colors and their design as I watched them and marveled at how quickly they were growing up. I walked around the shop, making sure that the manicurists don’t take advantage of them and a good thing too because they were trying to skip steps and get my nieces out of there quickly even though they charged the same amount as they did their older customers. 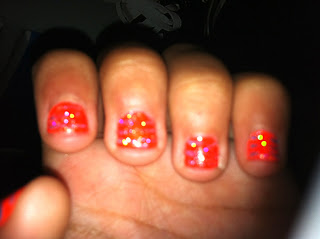 Our next stop was to going to be Toys R US to buy characters for their Sky Lander Game. On our way, I put gas in my car. My nieces told me that my car was dirty and that I should wash it at the gas station’s drive-through car wash. This was my first time doing this and would definitely be my last. What a waste of money and a potential damage to the car. Not only did it not wash the dirt off, it made my car look worse, not to mention that my windows were almost shattered from the force of their dryer. It was a worrying experience as my nieces giggled. They said their dad does it all the time.

At Toys-R-US, we spent about 40 minutes. As all parents know, once you get the kids in the toy store, it’s hard to get them out. But that’s okay, I had fun with them. After that, off we were for some ice-cream, the good old fashion way – at the Rite-Aide. The young guy in a white shirt and dark slacks behind the counter was kind and patient as we sampled a few things. He even gave us a discount. We left the store, ice-cream cones in hand and walked a few shops down to the pet store. My nieces wanted to buy a hamster. I said no way; their father would never talk to me again. They already have two finches, two parakeets, two guinea pigs, and two gold fish left over from the Persian New Year. 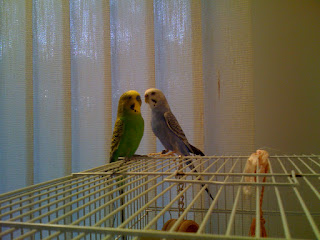 It was an expensive day. But I don’t get to do it that often and I really loved being around them as we enjoyed our ice-cream, admired the pets and later headed to their house to hang out with my sister-in-law and my brother who were going to be back home from work. Oh and did I mention that that night I had no trouble falling asleep. I was so tired that I passed out without needing a sleeping pill :) 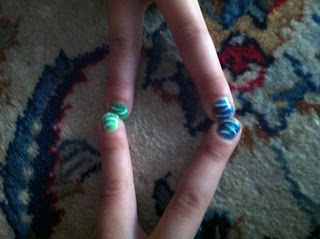 Posted by Homa Pourasgari at 11:12 PM

I used to enjoy similar times with my nieces and nephews when we were all younger!

We took a more gender neutral approach, and I found stories of their Mothers farting as children was always a sure fire winner!

LOL Rupert! My nieces are very young and they do talk about really gross things sometimes, too gross to include it in my blog! They are both girly and tomboys, depending on their mood :)