An Easter Brunch at I cugini 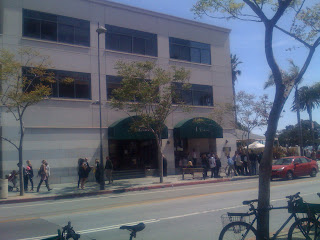 Everything went wrong in the morning. My friend had food poisoning from last night’s outing with friends and couldn’t go to the Easter brunch we had planned weeks ago. Disappointed, I got busy doing my normal routine, juicing and preparing my mom’s breakfast. When Sandy arrived to help out with my mom, I decided that I really wanted to get out and do something fun.
I called up a friend of mine who had no plans for the day and decided to meet at I cugini. When we got there, the place was packed, but no worries; I had a reservation for inside seating for two. Except that the hostess told us we had to sit in the patio or wait a longtime. I asked to speak to the manager and when he came over, he told us the same thing.
I told him that there were a bunch of empty seats in the back and why couldn’t we go sit there. At first he was defensive because he couldn’t come up with an excuse. I think he was saving those seats for a very large party and didn’t want to say so because he knew I would get on his case. He said he had no space and that there were others waiting. And to make matters worse, he offered me a crappy table in the bakery. I told him that I did not want to sit there and that I did not care if others were waiting. That was his problem and not mine for overbooking. I had made a reservation for inside seating long ago and that he should honor it.
We got into an argument and all I could think about was that if he doesn’t seat us, I’m going to write a bad review about the place on Yelp. Luckily, he gave us a good table and tried to fake a smile. I didn’t really care whether or not he liked me. The point was that we got a good table and a nice person to serve us. Yes I know, I sound mean, but I just don’t like people pushing me around and making me feel bad for their mistake. Besides, the other guests were nodding their heads and agreeing with me as I complained, but they didn’t have the guts to speak out. I mean really…why the heck did they overbook and especially on Easter? And why didn’t they offer a discount or free mimosa and appetizers at the bar for making their guests wait for so long? Truly not smart of them.
Anyway, as I said, all turned out okay and after that things went by smoothly. Below are a few pictures I took while there and later on when my friend and I went for a walk. And by the way, I do recommend this place for Brunch even after all my prior complaints. They had a decent selection of dishes and once we sat down, the service was good. And in case you’re wondering why I waited way past Easter to write this, my photos didn’t turn out well because of the lighting and I had to fix them.


Posted by Homa Pourasgari at 10:35 PM No comments: